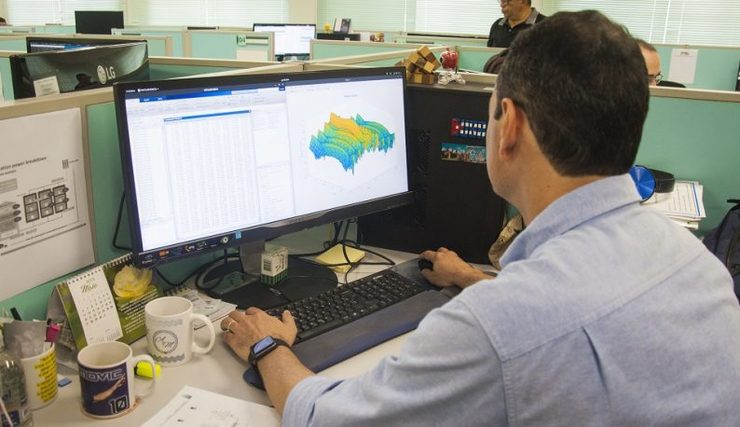 Water loss is a recurring problem for the water supply of Ceará, with a waste rate that reaches more than 40%, caused by clandestine connections or leaks in the distribution system. Among the possible solutions to this situation is the proposal of researchers from the research Group on Wireless Telecommunications (GTEL), from Universidade Federal do Ceará, based on the use of small sensors and Internet tools of things.
With reduced size, these sensors would be deposited in the supply pipes, where the loss of water usually happens, mainly due to leaks between one point and the other of the system. There, they would transmit information about water, such as volume and quality, to serve as indicators of what may have occurred in the path of the Hydric resource.
If the sensors were placed at different points in the supply system, they could indicate the characteristics of the water at each point, but they would also allow conjectures about when the route was leaking. If from point A to B there is a difference in water flow, it can be assumed that there are problems in the network exactly between these two points.
This would facilitate, for example, the maintenance work done by the water and sewage Company of Ceará (CAGECE), responsible for the distribution of water in the state, as it would count with a reduced universe to try to solve the problems of water loss.
“The exact detection is more complicated, but you can know in which snippet (the problem occurs),” says Prof. Charles Casimiro, coordinator of the research at GTEL. “Today it is not known whether the problem is between the weir of the Hawk and the final neighborhood of Fortaleza, for example,” he points out.
The project is developed in partnership with the Royal Institute of Technology (KTH), Stockholm, Sweden, responsible for the production of sensor hardware, while the GTEL, in the Department of Engineering of Teleinformatics of the UFC, is in charge of developing the Software tools that optimize the transmission of sensor information and the processing of such data.
The interest of the Swedish institution in the project is due to the constant floods occurring in Stockholm, something that undermines the quality of water. In Ceará, although the biggest problem is loss, the sensors would also play an important role in identifying the chemical elements present in the resource.
“When we talk about contamination, we do not necessarily affirm that water is improper. She may have a certain concentration of calcium, for example, something that might be bad for someone who has a kidney problem. It is important that this information be available “, argues Casimiro.
Transmission
Discovering the best way to transmit and treat the data will be one of the tasks of the GTEL, which will need to deal with the differences between the types of sensors-depending on the information fetched-and the region in which they meet. “The sensors will transmit the signal from inside a pipe, which is beneath the earth. It transmits the information partially in the aqueous medium and there is still the layer of land and an aerial part “, describes the teacher.
In addition, there is also the “calibration of sensors”, that is, the process of adapting them to transmit a certain type of information. A sensor capable of working with different data would make the project less viable, since it would have much larger transmission and size complexity. From this arises the need to specify the usefulness of each sensor, focusing on a certain element of water.
Image and sound processing
Another research, also in an early stage, developed in GTEL, in partnership with the University of Bordeaux, in France, is focused on optimizing the processing of large data in order to ensure a better correspondence between the information transmitted and the They refer to. Satellite images are examples of application objects for the search, as they suffer from the distance between the points of origin and the arrival of the data.
The problem can be explained as follows: Imagine that, to get to the point of destination, the data that form the image of a satellite need to travel a certain distance, which is not straight, but curved. The information can not simply “cross” the earth without any interference, but adjust to the curvature of it, which can impair the reliability of the image.
Audio files can also be used as an example. It’s common to ask ourselves whether the voice heard actually belongs to a particular person. “The measurement of this is done by distance (difference between recording and original voice). Comparing the audio with the original voice, we can see that the difference is small (if the voice is corresponding), “explains Prof. Casimiro. It would then be how to try to ascertain the alignment between the distribution of frequency bands.
As well as the images, the audio also suffers modifications on account of curves. As an analogy, we can say that it is as if there was a small “hill” between the point of origin and the destination. “To get to the other side, you won’t dig a tunnel into the hill, but climb up and go there,” he compares. “Characterizing these curved spaces, we have managed to improve this notion of distance.”
These curvatures are precisely the essential parts so that researchers can “calculate” more accurately the information transmitted. Images could be corrected to better match reality, for example. “Even for health there would be application, with the improvement of X-ray images”, sees the researcher.
Source: Prof. Charles Casimiro, from GTEL – e-mail: charles@gtel.ufc.br